1998 : The restoration of the Dispatch Room

The Dispatch Room of the King is a small room inside his interior apartment, just behind his inner office. It was used for the discreet reception of the king’s agents and the reading of the most secret dispatches. Modified at several times in its shape and volume throughout the reign of Louis XV, it was given its present form in the beginning of the reign of his successor, under the direction of Gabriel, in 1774-1775. After becoming rather dilapidated over time, it required a complete restoration, which was made possible with the support of the Chronopost group and of the Société des Amis de Versailles in 1997-1998. With the restoration of this discreet and secret room to its original state, a long stretch of the history of Versailles was revealed in the life and uses of the interior apartment of the King around his office, one of the most important places of the exercise of power in the France of the Ancien Régime. 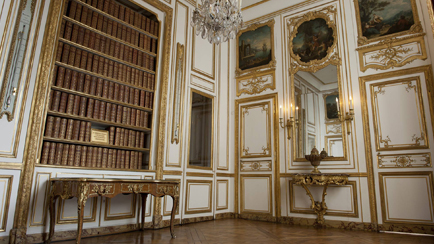