2005 : The restitution of the Three Fountains grove

The restitution of the Three Fountains grove, in the northern part of the gardens, was the first intervention in Versailles of the American Friends of Versailles, a non-profit organisation of American sponsors founded in 1998 and chaired by Mrs Catharine Hamilton.

The grove, laid out by André Le Nôtre between 1677 and 1679, essentially consisted of rocaille and lead structures with water features of varied shapes in three principal basins on descending levels from north to south. Fragile and with few spectacular superstructure features, the grove gradually disappeared. Research on the ground coupled with all the archive images and documents enabled the optimal restitution between 2002 and 2004 of the terraces, the basins and the water features as Louis XIV knew them. The most spectacular element is the large lead conch shell of the upper basin, recreated in the workshops of the Coubertin foundry. 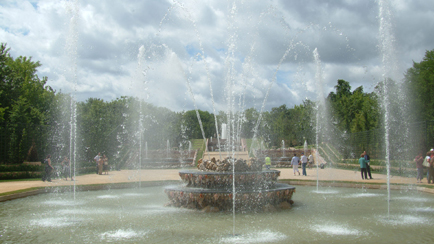