2000 : The restoration of the ceiling of the Hercules Salon

After the restoration of the large The Meal at the House of Simon the Pharisee by Veronese in 1994-1997, the restoration of the vault of the Hercules Salon became a true necessity. The decor of the room was designed as the setting for the painting, one of the greatest masterpieces of the collection of Louis XIV. Located to the north of the central section of the Palace and linking it with the North Wing, the salon is a very large room whose lighting posed a great challenge for the architects and for the decorators. Opening by very large windows to the east and the west, it is covered by an immense ceiling with arches, deep and very difficult to light. The first painter to Louis XV, François Lemoyne, wore himself out painting it and the years had veiled it with dirt and yellowed varnish that did not do justice to his talent. The cleaning restored to the composition all its drama and bright colours and thus lit up again the sky of this room which enhances the painting of Paul Veronese. And it was the sponsor of the restoration of this painting, BNP Paribas, which once again agreed to take up the challenge of this spectacular restoration in 2001. 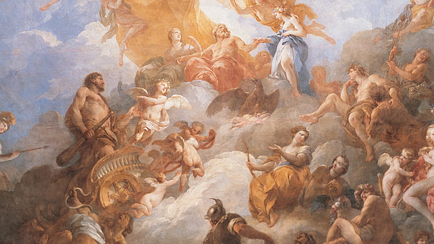