1970 : The restoration of the Games Salon of Louis XVI

The present Games Salon of Louis XVI was installed in 1771 at the end of the “New Rooms”. In 1785, the Palace Furniture Store administration (Garde-Meuble) ordered from the joiner Jean-Baptiste Boulard a suite of thirty-six chairs of which twenty-four were fully upholstered and twelve others given a cushion, a partition and a screen, all of them richly covered with a superb crimson damask decorated with gold thread. All the furniture of the room was sold off during the French Revolution, but Versailles was able to buy back in 1953 and 1956 the two pairs of corner chairs delivered in 1775 by the cabinet-maker Jean-Henri Riesener. From 1961 on, with the dispersion of the Murat collection, Versailles had the possibility of acquiring ten chairs which gradually returned to the Palace: two in 1968, one in 1972, four in 1976, two in 1992, two in 2002, one in 2005 and one other in 2007. All were given the braiding and the brocaded damask rewoven like the originals. The lyre clock in Sèvres porcelain recently deposited by the Louvre museum was also present on the eve of the Revolution, as were the gouaches by Van Blarenberghe from the collections of Louis XVI.

Today, the wood panelling and furniture, including the games tables on deposit from the Mobilier national, demonstrate the efforts made by Versailles to find and put back in place the objets d’art as they appeared in the reign of Louis XVI on the eve of the Revolution. Thanks to all these efforts and the great generosity of benefactors, the Games Salon of Louis XVI is very close to its original state. 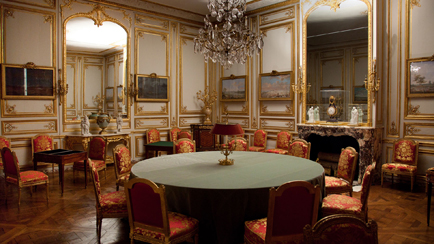