2008 : Restoration of the Apollo’s Bath grove

The early 21st century glaringly revealed the urgent necessity of putting into shelter most of the statuary of the gardens of Versailles. The continuous exhibition of sculptures in the open air since 1660-1670 has led to all sorts of deterioration owing to the weather and human interventions. Made increasingly fragile, the marble sculptures are affected by many types of irremediable damage for which simple repairs will not suffice. Some works are more particularly exposed, such as the three famous groups of Apollo’s Bath, executed in 1666-1675 under the direction of Girardon for the Tethys Grotto. Placed in the gardens when the latter was demolished, and moved around several times in the groves, they were placed in the 1770s in the Rock of the new grove taking their name, designed by Hubert Robert. Placed in rather shallow openings, they were attacked by frost, the water of the cascades and the humidity of the Rock.

They were first dismantled in July 2008 to make plaster moulds and restore the groups. The Versailles Foundation, founded in 1970 by Florence van der Kemp whose daughter Mme Barbara de Portago is the President, funded most of the operations. The new groups were put in place in 2009. 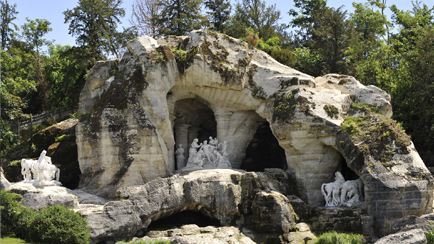