1978-1985 gave new life to Versailles. The passing of a “programme” law at last authorised the work that Gérald van der Kemp had hoped for since taking up his post as President in 1953. A programme lasting several years allowed the completion of the major ongoing operations, such as the restitution of the furniture of the King’s bedchamber, begun in 1953 and completed in 1980, the restitution of that of the Hall of Mirrors with the return of tables, occasional tables, wall seats and stools, and chandeliers (1980), the restoration or restitution of all the ground-floor apartments of the central section of the Palace (Dauphin and Dauphine, Mesdames, lower apartment of the Queen), as well the building in the Gabriel Wing of the staircase planned by this architect in the 1770s. This work was inaugurated in 1985. 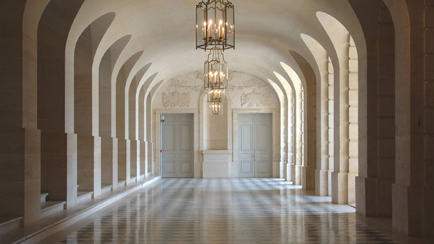