The restoration of the first room of the State Apartment of the King, the Mercury Salon, began in 2011. The deterioration of the walls and the ceiling required consolidation work on the walls and the general restoration of the ceiling. It was decided to extend this work to the entire room, including the restoration of the other paintings present, notably those over the doors, and a rethink of the choice of furniture. The restoration of the paintings of the ceiling by Jean-Baptiste de Champaigne was followed by that of the sculpted features. After the scaffolding came down, the wall hanging of silk damask from Lyon was renewed, and the furniture was put back in place. The idea was to evoke the use of the room as the royal bedchamber when it was occupied in 1700 by the grandson of Louis XIV, the Duc d’Anjou, who became king of Spain under the name of Philippe V, before his departure for his new country. So, most unusually, for a few weeks from 16 November to 4 December 1700, Versailles lodged two kings under the same roof.

The room will be inaugurated on 8 October 2012.

The end of 2012 will see the transfer of some of the departments of the Palace to the Grand Commun, built by Hardouin-Mansart in 1681-1684 for the accommodation of the personnel of the court’s departments and the officers of the king. After becoming an arms factory in 1793, then a school during the Restoration, it was the Dominique-Larrey military hospital from 1832 to day superbly rehabilitated building will eventually house all the administration and conservation departments of the Palace, giving back to it the function to which it owes its existence. 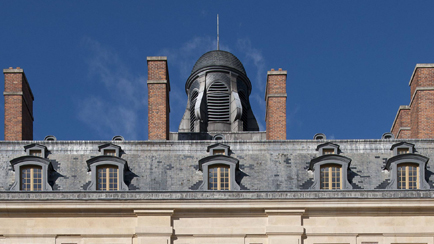 Courtyard of the Grand Commun in 2012