The Menagerie of Versailles was designed by the architect Louis Le Vau in 1663 for the south-west end of the Park, in the old farm of La Boissière on the road to Trappes, purchased by Louis XIV in 1662. In 1664 it received its first birds and domestic and wild animals. The plan of the Menagerie was simple. The front of the building looked out on a courtyard. The Menagerie was centred on an octagonal building covered by a slate dome []. A balcony surrounded it on the first floor, offering views over the different enclosures arranged in fan-shape around it in seven enclosures [] separated by fences. A little further away, another long building housed the aviary.

The Menagerie of Versailles was then linked to the garden of Versailles by the earthworks of the south branch of the Grand Canal in 1668. The place was used for festivities and outings to observe the animals and was also soon embellished for the Duchesse de Bourgogne by Jules Hardouin-Mansart in a new construction campaign from 1698 to 1700. 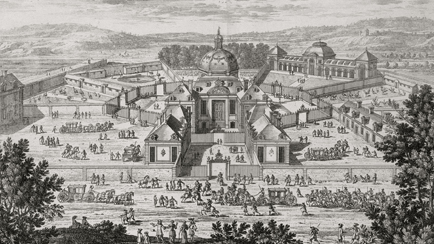