At Versailles, as in all the great historical parks and gardens, the maintenance of their tree cover is a constant concern which becomes more acute when the trees reach full maturity. A general replanting is required about every hundred years. Versailles had one in the early reign of Louis XVI, between 1774 and 1776, then a second one more spread-out in time between 1860 and the 1880s. The 20th century needed one and it was the two big storms of 3 February 1990 and 26 December 1999 which underlined the need for a general replanting owing to the scale of the devastation, over 1,300 trees were badly damaged in the first storm and over 10,000 in the second one. The work then carried out restored to the garden and Park a tree cover that more closely corresponded to their history. The carefully ordered lines, especially viewed from the Palace, recovered their grand successive pattern which reveals the perfect mastery of the art of Le Nôtre. 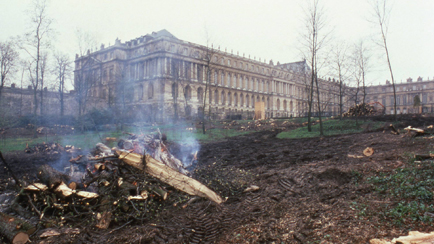 The park devastated in December 1999