1770 : The inauguration of the Royal Opera

The multiplication of festivities at Versailles showed the great necessity of having a proper theatre designed for these events. The Hall of Mirrors was fine for balls, but was not suited for the theatrical performances which had to be given in ephemeral theatres in the palace. At the end of the North Wing, Louis XIV had already thought of building an opera house, but the kingdom’s finances did not allow the realisation of this project. It was Louis XV who decided to entrust to the architect Ange-Jacques Gabriel the construction of a modern Royal Opera house for the forthcoming wedding of his grandson and an Archduchess of Austria. The work began in 1668 and was completed and inaugurated for the wedding of the Dauphin and Marie-Antoinette on 16 May 1770. The royal Opera served as the setting for numerous festivities including costumed balls. For these, the auditorium was transformed and the stage covered by a sumptuous illusionistic painting as can be seen in the image left by Claude Jean-Baptiste Jalliers de Savault (1740-1806) in Besançon. The Royal Opera was used again for weddings of the Comte de Provence in 1771 and the Comte d’Artois in 1773, as well as for official state visits until the French Revolution. 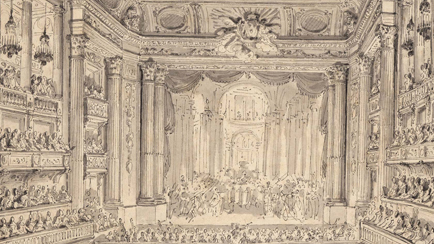