In Versailles, the Hercules Salon is located at the junction of the central section of the Palace and the North Wing. On the first floor, this very large room in the prolongation of the King’s State Apartment was previously the site of the fourth chapel and was used very occasionally as a reception room.

The work was entrusted in 1712 to the architect Robert de Cotte, but with the death of Louis XIV in 1715, the work was interrupted until 1725. The painter François Lemoyne (1688-1373) decorated the immense vault of the ceiling between 1733 and 1736 on the theme of The Apotheosis of Hercules, raised to the rank of the gods by his father Jupiter.

The Palace of Versailles has also preserved the scale model presented to Louis XV in 1732 and used as the model for the final composition depicting 142 figures including Juno, Jupiter, Hebe, the Muses, Apollo and Heracles. Admired at its inauguration, Lemoyne’s work earned him the title of first painter to the King. But Lemoyne was worn out by his labours and committed suicide shortly afterwards. 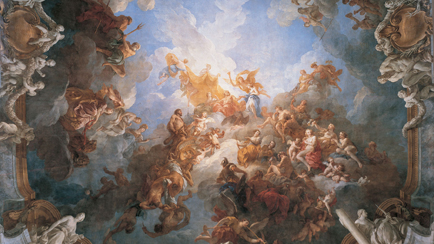 Ceiling with "The Apotheosis of Hercules"