Since 1684, the bedchamber of the King in Versailles had been a small badly lit room. The last large-scale programme of interior refurbishment was to place the King’s bedchamber in the centre of the Palace between the Bull’s-Eye Salon and the Council Cabinet. To do so, Jules Hardouin-Mansart walled up in the old room the three doors opening into the Hall of Mirrors. For greater height, the attic floor was added to build an alcove and the sacred area of the king behind the balustrade. The sculptor Nicolas Coustou (1658-1733) carved for over the bed the group of France Watching over the King’s Sleep.. The alcove and the bed were decorated with a very rich red brocade decorated with gold thread and with foliated and floral patterns.

The daily life of the court followed the rhythm set by the sovereign: in this bedchamber the high dignitaries gathered in the morning for the ceremonies of the “small levee” and “grand levee”, and then in the evening for the “small” and “grand” going-to-bed ceremonies. Behind the carved and gilt wooden balustrade was the sacred area of the king, but the bedchamber was also the setting for special ceremonies for awarding decorations such as that of the Order of the Knights of Saint-Louis.

The finely carved and gilt panelling provided an ideal backing for presenting paintings from the collection of Louis XIV, fitted over the door or in the caissons of the attic. They were works by the painters Domenico Zampieri (1581-1641), Valentin de Boulogne (1594-1632) and Louis Boullogne (1654-1733).

Emptied of its furniture during the French Revolution, the bedchamber was fitted out again by Louis-Philippe and its textile decor was entirely restored in 1980. 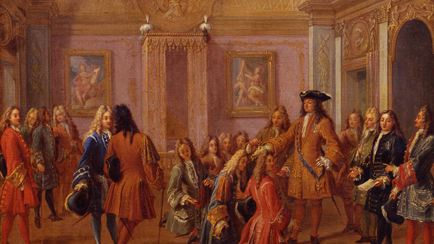 Ceremony of the life of the Court in Versailles