1774 : Marie-Antoinette and the Petit Trianon

On 6 June 1774, all the royal family was still in mourning for the death of Louis XV and gathered in the Petit Trianon. Louis XVI had decided to give this house to Marie-Antoinette. The Comte Mercy-Argenteau, Austrian ambassador in France and agent of the Empress Maria Theresa described the episode: “For many years, and when Madame the Archduchess had yet to become queen, she keenly desired to have a country house for herself and had formed several small projects in this regard. On the death of the king, the Comte and the Comtesse de Noailles suggested the Petit Trianon […] I begged [Marie-Antoinette] to make this request herself without any preparatory measures and without anyone’s help. HRM deigned to agree with my idea and the first time she mentioned the Petit Trianon to the king he replied with real enthusiasm that this holiday house was for the queen and that he would be delighted to transfer it to her.”

In the Petit Trianon, Marie-Antoinette had a place where she could escape from the court Etiquette and live as she pleased; she even told the king that she accepted Trianon on condition that he came only when he was invited. It was quickly transformed at great expense according to the plans of the architect Richard Mique. The garden became Anglo-Chinese with a dairy and other annexes, a small theatre was built, etc. and everything in and around the Petit Trianon was devoted to festivities and amusements. 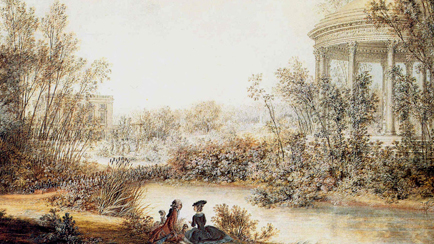