From the end of the reign of Louis XIV, numerous criticisms were made to denounce the lack of harmony between the façades of the Palace facing the town. All the architects of the king worked on a “Grand Project” or “Grand Design” for their reconstruction. At the end of his reign, Louis XV agreed to entrust to the architect Ange-Jacques Gabriel the project of redesigning the buildings of the Marble and Royal courtyards. This “Grand Design” proposed the construction of a new u-shaped courtyard of new buildings with at the end of it a central projecting section surmounted by a quadrangular dome. In 1771 Louis XV accepted the plans submitted by Gabriel who then began the demolition of the Right Wing of the Royal courtyard built in 1662 and rebuilt several times. The work lasted three years and then the state of the finances and the death of Louis XV in 1774 interrupted the work so that only the great stone Gabriel Wing remains today. 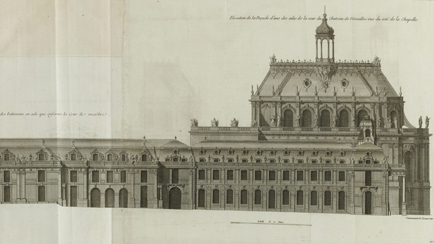 Section of the central building of Versailles