1975 : The bedchamber of Marie-Antoinette restored

On 16 June 1975, visitors to Versailles discovered the newly refurnished bedchamber of the Queen. The refurnishing of this room began on the eve of World War II in 1939 with the acquisition by the State with the participation of the Société des Amis de Versailles of the screen of the bedchamber delivered by Jean-Baptiste-Claude Séné in 1787. In 1946, weavers in Lyon began to re-weave the brocaded silks and the borders of the alcove hangings which were re-hung in 1948. They copied the silk lampas of the “summer furniture” of the bedchamber of the queen ordered from Desfarges in 1786 featuring bouquets of lilies and peacock feathers on a brocaded white background. The hanging was the one present before the royal family left Versailles in October 1789.

At the same time, the wood panelling and griotte marble fireplace were identified in the storerooms of Versailles and put back in place. In 1957, the embroidering of the fabric of the screen and chairs was begun (including the folding stools delivered in 1773 to the Comtesse d’Artois, donated in 1966 by M. David David-Weill). In 1959, Versailles bought in New York the authentic counterpane of the Queen’s bedchamber. Between 1960 and 1964, the Savonnerie carpet of the alcove was re-woven identically. The rock crystal and gilt bronze chandeliers were restored, as was the canopy bed.

As the baluster of the Queen’s bedchamber was irremediably lost since the Revolution, the conservation department of Versailles decided to have a new one carved and gilt identically. The diamond casket of the cabinet-maker Ferdinand Schwerdfeger was put back in place as in the gouache by Gautier-Dagoty showing Marie-Antoinette in her bedchamber.

The sumptuous decor unveiled in 1975 continues to surprise visitors who come to admire the Queen’s bedchamber, which combines original pieces and faithful reproductions. 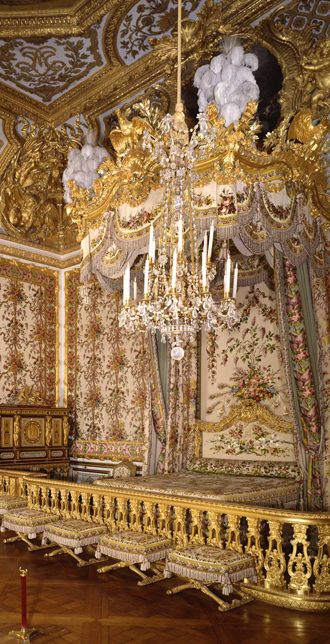