1957 : The restoration of the Royal Opera

A masterpiece of the art of Versailles from the end of the reign of Louis XV, neglected since the French Revolution, the Royal Opera had to wait until the mid-20th century for its complete restoration, which had become urgent. The magnificent theatre with its transformation machinery designed by Gabriel had been abandoned after the famous banquet of the King’s Guardsmen at the start of the Revolution.

Restored, transformed and repainted under Louis-Philippe by Frédéric Nepveu, it was further transformed for the installation of the provisional National Assembly of 1871 and the Senate in 1875. Its painted ceiling was replaced by a glass roof to ensure appropriate light.

The Senate, still responsible for the place despite its return to Paris in 1879, accepted in the 1950s the restoration project proposed by the Palace architect Japy, and the work began to restore the theatre to its state at the inauguration in May 1770. Carried out from 1953 to 1957, the work restored its initial colours, blue, pink and gold, rebuilt the ceiling painted by Durameau, the floor of the auditorium, the richly embroidered stage curtain, and its drapes, seats, chandeliers, etc. The restored Royal Opera was officially opened on 9 April 1957 during the official visit to France of Queen Elisabeth II of the United Kingdom and Head of the Commonwealth.

A new programme of work to upgrade the safety of the theatre (2007 to 2009) completed this exemplary restoration. The Royal Opera is today a venue for shows and festivities after recovering as far as possible its original appearance. 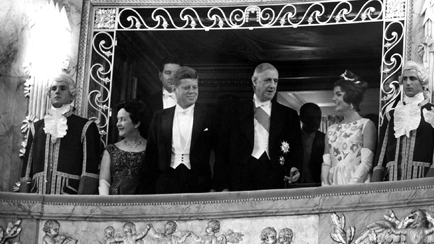