1738 : Louis XV and the creation of the Small Apartments

On his arrival in Versailles and before his wedding in 1725 with Marie-Leszczynska (1703-1768), Louis XV (1710-1774) picked the inner courtyards of the Palace for small rooms intended for a more intimate and comfortable life which are now called the “King’s cabinets”. The monarch wanted a more private life in rooms less formal than the State Apartments. Fully enjoying his new small rooms, he was very soon imitated by the queen, the Dauphin and the princesses.

Constantly refurbished and extended over the years, these interior apartments were decorated and furnished with ever more refined taste up until the final years of his grandson Louis XVI on the eve of the French Revolution.

The interior apartments of the King and the Queen were decorated with fine wood panelling carved by the greatest sculptors of the period, Jacques Verberckt until the late 1760s for Louis XV, then the Rousseau brothers for Marie-Antoinette and Louis XVI. 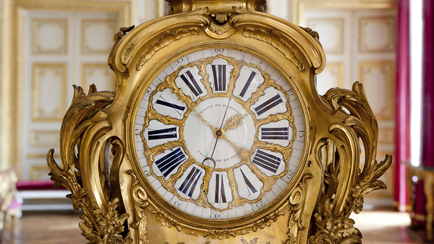