In 1686-1687, Louis XIV ordered the demolition of the summer house on the site of Trianon, at the end of the north branch of the Grand Canal, the “porcelain Trianon” that perfectly expressed his taste as a young man. The king wanted a new place to stay in the summer, far from the government work of Versailles, with his family or a small group of friends. He instructed his first architect Jules Hardouin-Mansart to design a larger and more solid house which was built in a few months between late 1687 and early 1688. The king dined here for the first time in the company of some ladies on 22 January 1688.

The new house, the “marble Trianon” or Grand Trianon, was an elongated palace built entirely on one floor with large “French” windows opening on the gardens. The façades of the entrance courtyard and the parterres were decorated with pilasters and panels of red Languedoc marble. Separating the entrance courtyard from the garden and the two wings of the palace there was an open gallery which was the king’s idea. The right wing was prolonged at a right angle by a gallery passing alongside the parterre and joining the other wing, also at a right angle, housing the guests’apartments. The king came to Trianon with his family and with intimate friends that he invited along. 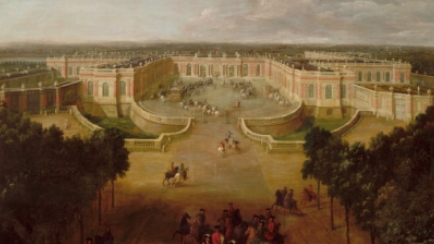