1867 : “Marie-Antoinette” exhibition in the Petit Trianon

Touched by the tragic destiny of Marie-Antoinette, the Empress Eugénie decided to revive the estate of Trianon by restoring the gardens and their small buildings and by refurnishing the small palace as closely as possible to how it was thought to have looked when the queen lived there. A commission was set up to locate and select the furniture, objets d’art and personal souvenirs of the queen in the State’s collections and private collections. It was chaired by General Comte Lepic, aide de camp of the emperor and Superintendant of the Imperial palaces, and the secretary was M. de Lescure, a representative of the Minister of State for Finance.

The opening of the exhibition in the Petit Trianon coincided with the opening of the second World Fair of Paris in 1867. The guests of the imperial couple could not escape a visit to Trianon.

The gathering of objects (144 numbered in the catalogue), in spite of its very heterogeneous nature, proved to be highly evocative. The idea of an exhibition dedicated to Marie-Antoinette was taken up again in 1955, in the Palace this time, with an abundant selection, then in 2008 with a truly scientific approach at the Grand Palais in Paris. 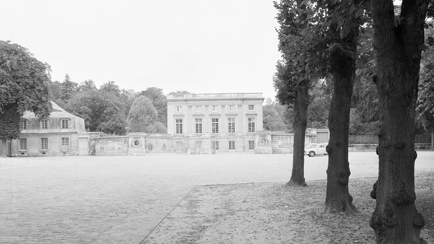