2009 : The inauguration of the Royal Railings and the statue of Louis XIV

Before the Revolution, two successive gates and railings separated the courtyards of the Palace, the forecourt, between the Ministers Wings, open to all, and the Royal courtyard, between the two Mansart wings, whose access was more reserved. The second one – the Royal Gate and Railings – was pulled down during the Revolution, and Louis-Philippe had replaced its gateway with an equestrian statue of Louis XIV to remind visitors of the great figure of the builder of Versailles. On a bronze horse cast during the Restoration by Cartellier for a statue of Louis XV and never completed, was placed a rider designed by Petitot and cast by Crozatier.

Over the years, the idea of the restitution of the Royal Gate and Railings gained support and the decision was taken in 2000. The statue of Louis XIV was taken down for restoration while excavations were carried out in the courtyard to locate the foundations of the railings.

After two years of work, on 8 July 2008, the new Gate and Railings were completed and inaugurated, thanks to the support of the Monnoyeur group.

A few months later, the restored statue of Louis XIV was reinstalled, no longer in the Royal courtyard, but down from the Palace on the Place d’Armes, where it once again greets visitors from all over the world. 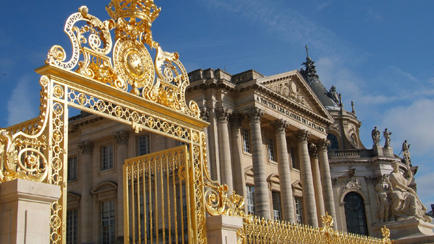 Royal Gate and Railings of the palace of Versailles