1682 : Installation of the court in Versailles

In May 1682, Louis XIV installed the court and the government in Versailles.

The idea had developed over several years and the king instructed his first architect, Jules Hardouin-Mansart, to draw up an extension plan for Versailles which required a significant enlargement of the Palace to be able to accommodate the full royal family and all the court officials, nearly 4,000 people. The South Wing built from 1678 to 1682 was intended for the royal children (Enfants de France), and the North Wing built from 1684 to 1689 was for the other princes. Located in the forecourt of the Palace, the Ministries were housed in the two Ministers Wings. These two brick and stone buildings housed the four Secretaries of State (Foreign Affairs, War, King’s Household and Navy).

For the catering department, the Grand Commun was built in the south. 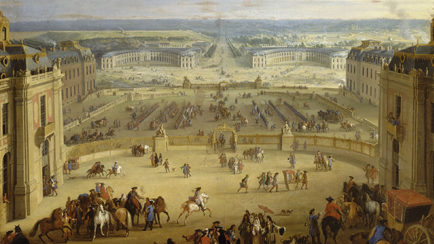 The stables of Versailles