1785 : The “Grand Project” for the reconstruction of the façades of the palace facing the town

In 1783, Louis XVI wished to relaunch the reconstruction projects for the Palace. It was decided not to adopt the “Grand Design” of Gabriel and the Comte d’Angiviller, the director of buildings, invited tenders from several architects. All the submissions were too grandiose and the Crown could not finance any of the solutions proposed.

The matching pavilion in the Royal courtyard was built by the Palace architect, Dufour, only between 1814 and 1821. 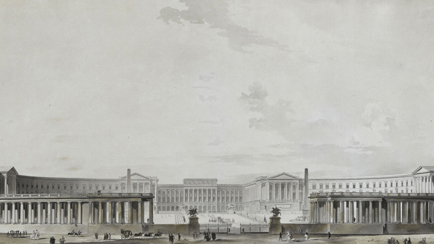 Proposal for the reconstruction of the palace of Versailles