1837 : The inauguration of the History Galleries of Versailles

On 10 June 1837, king Louis-Philippe officially opened the History Galleries of Versailles. The event was planned to form part of the festivities organised for the wedding of his son Ferdinand-Philippe, Duc d’Orléans, with the title of “Royal Prince”, with a young German princess, Helen von Mecklemburg-Schwerin.

The creation of this history museum in the Palace of Louis XIV, unoccupied by the Crown since the departure of Louis XVI and Marie-Antoinette in October 1789, was a personal idea of the king, anxious to find a definitive function for Versailles that would preserve the Palace from misuse. The decision was announced in 1832 and work began almost at once, led by the architect of the Palace, Frédéric Nepveu. It continued long after the inauguration of June 1837 until the Revolution of 1848 put an end to it. Louis-Philippe handled the financing of the work from the civil list, amounting to over twenty-three million gold francs, and monitored the progress closely, making nearly four hundred visits to the developing museum in fifteen years.

The museum presents the history of monarchical and Christian France from the reign of Clovis in the 5th century up to the accession of Louis-Philippe thanks to the Revolutionary Days of July 1830. The years passed and the king devoted several rooms to the history of his own reign and the military campaigns of his sons. 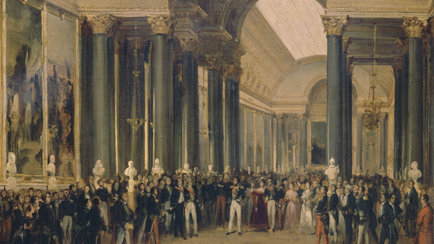 Inauguration of the museum of Versailles