1980 : The restoration of the bedchamber of Louis XIV

Before the Second World War, the Grand Bedchamber of the King held furniture put there by Louis-Philippe. After the reconstruction of the bedchamber of Marie-Antoinette, the restoration of the bedchamber of Louis XIV fitted out in 1701 had to be undertaken. The Mobilier national still kept fragments of the brocade delivered at the end of the reign of Louis XIV, so it was decided to re-weave it in the identical way to line the alcove of the royal bedchamber and for the bed. It was thanks to the benevolence of Mrs Barbara Hutton, M. Arturo Lopez-Willshaw, the Albert and Mary Lasker Foundation, The American Versailles Foundation and the Société des Amis de Versailles that the crimson brocade decorated with golden thread corresponding to the room’s winter furnishing was re-woven.

The furniture of the period included a suite of twelve armchairs and twelve folding stools, long gone, which were replaced by a pair of gilt wooden Regency armchairs donated by M. Arturo Lopez-Willshaw and Baron Alexis de Rédé. The National Manufactory of the Savonnerie generously decided to donate a modern copy of the carpet then in place behind the balustrade. Louis-Philippe had put back the partly authentic balustrade which was then completed, as was the wood panelling which was repainted white and gilded. The original paintings were put back in place in the attic and over the doors.

The entirely restored bedchamber was officially opened in 1980 after over twenty-five years of work and it still impresses the visitors to the palace of Versailles. 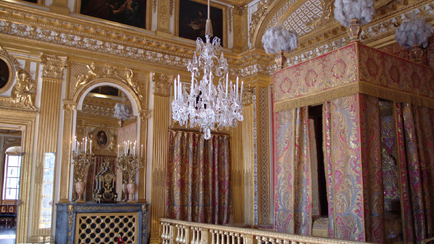