1919 : The signing of the Treaty of Versailles

On 28 June 1919 the Peace Treaty putting an end to World War I was signed in the Hall of Mirrors. The choice of Versailles was not due to chance. The Allies wished to manifest in this place where it was proclaimed in January 1871 the end of the German Empire that had dragged all of Europe into war. The Hall of Mirrors recovered for a few hours its function as a palatial hall used for the celebration of major diplomatic events.

The room was richly decorated for the occasion with the parquet covered by carpets woven by the Savonnerie for Louis XIV stitched together. For the signing of the Treaty, the collections of the Palace provided a handsome Louis XV desk attributed to Cressent, matched by a large neo-Louis XIV-style armchair from the reception hall of the Elysée palace. However, apart from these appearances, in a France bled white by the war and totally exhausted, sobriety was the watchword. The President of the Council, Georges Clemenceau, had given strict instructions to this effect. 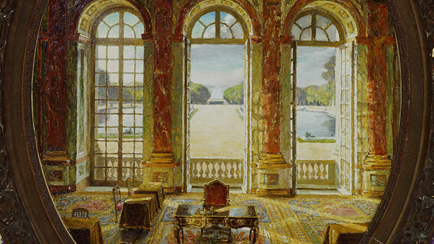 Signing of the Peace Treaty of Versailles