At the death of Louis XIV, Louis XV was only five and he left the palace of Versailles for that of Vincennes, and then Paris. He was an adolescent when he returned to Versailles on 15 June 1722. There he rediscovered the military exploits of his great-grandfather Louis XIV painted on the ceiling of the Hall of Mirrors.

Louis XV was a king radically different from Louis XIV, a pacific ruler who also wished to break away from the theatrical presentation of the State Apartments. Although anxious to preserve the royal “levee” and “going-to-bed” ceremonial, Louis XV soon had his architect fit out a new bedchamber more comfortable than the grand ceremonial bedchamber used for the daily drama of his rising and going to bed. He also had smaller rooms fitted out by partitioning off his apartments.

Louis XV instructed his architect Ange-Jacques Gabriel to build in Trianon a sumptuous house of leisure built in the early 1760s and intended for Madame de Pompadour. Then for the wedding of his grandson the Dauphin, Louis XV ordered the construction of a theatre, the Royal Opera. 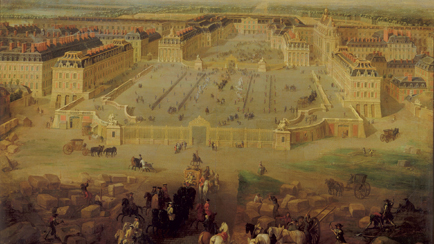