1752 : The demolition of the Ambassadors Staircase

The grand staircase of the King’s apartment was called the Grand degré or the Ambassadors Staircase. Imagined by the architect Louis Le Vau, it was built by his successor, François d’Orbay, and the painter Charles Le Brun, between 1672 and 1679. Very richly decorated with polychrome marble, gilt bronzes and paintings, it was lit by its glass roof. All its decor celebrated the victory of the king in the Dutch War (1672-1678). On the landing, several illusionistic paintings celebrated the military glory of Louis XIV: the painted cartouches opening like a window on a landscape. In the centre was the marble bust carved by Warin. This majestic image of the king dressed in armour with the paludamentum cloak was a reference to the power of ancient Rome.

Poorly lit, rather dilapidated and rarely used by Louis XV, except for grand diplomatic audiences, the staircase was destroyed in 1752 on the king’s orders because of the difficulty of maintaining the glass roof and to permit the extension of his inner apartment. 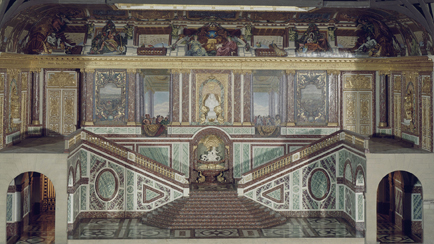 Scale model of the Ambassadors Staircase