1789-1792 : The Revolutionaries against Versailles

The days of 5 and 6 October 1789 sealed the fate of court life at Versailles. A hate-filled mob of five to six thousand people from Paris invaded the Place d’Armes and then all the courtyards of the Palace. At around 6 in the morning on 6 October the mob had completely overrun the Palace. In this terrible confusion, the royal family escaped by the back rooms. The French guards managed after many efforts to rid the Palace of its invaders. The revolts then forced the royal family to travel to the capital in several carriages.

It was though at first that this was a trip from which the king would return; but the political events turned in favour of the Revolutionaries and the Palace slowly settled into a long sleep. With the fall of the monarchy and the execution of Louis XVI and Marie-Antoinette, Versailles was stripped of its precious fabrics, its tableware, paintings, furniture, etc. Abandoned, this residence became a liability for the new regime in place and there was talk of demolishing it. 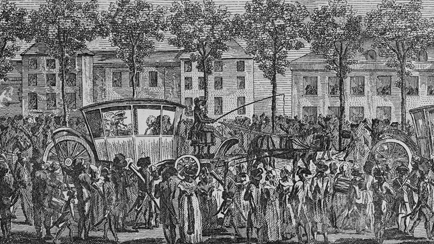