1966 : The inauguration of the Grand Trianon restored

General de Gaulle, a great figure of the nation’s history and the embodiment of all the grandeur of the State, could not be indifferent to the splendour of Versailles. On 26 May 1961, he solemnly received here the new and young king of Belgium, Baudouin I and his wife, at a sumptuous state banquet in the Hall of Mirrors, and a week later it was the turn of President John F. Kennedy and his wife, after she had requested the same honours in Versailles… So in 1963, General de Gaulle decided on the general restoration of the Grand Trianon to receive and accommodate the outstanding guests of the Republic. The apartment reserved for foreign Heads of State and their wives was the former apartment of the Empress in the left wing of the Palace prolonged by the former apartment of king Louis-Philippe. In parallel, General de Gaulle ordered the restoration at the other end of the Trianon-sous-Bois wing to provide a secondary residence for the President of the Republic. The restored building was inaugurated on 10 June 1966.

The fitting out of the historic apartments, for which the commissions of paintings by Louis XIV for Trianon and by the government of the First Empire for the furniture were taken into account, was entrusted to the conservation department of Versailles in collaboration with the Mobilier national, which also worked in the apartments to be created under the direction of the decorator Serge Royaux. Apart from that, major operations were undertaken in the basement to house the numerous technical installations: the air-conditioning and heating systems, telephone exchange, pantries and kitchens, etc. After being much used in the 1960s and 1970s, Trianon was gradually abandoned as a presidential residence, and the areas concerned were recently handed over to the Public Establishment of Versailles. 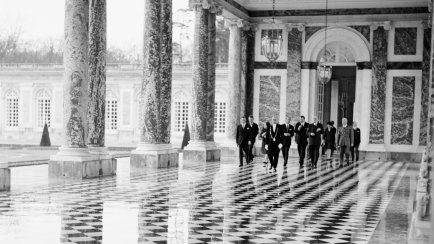 Reception at the Grand Trianon of Prince Philip, Duke of Edinburgh by General de Gaulle in 1966.