1997 : The restoration of The Meal at the House of Simon the Pharisee by Veronese

The first grand sponsorship of a painting in Versailles, the restoration of the large The Meal at the House of Simon the Pharisee by Veronese was carried out from 1994 to 1997, by the collaboration of the Palace, the Restoration Department and the Research Laboratory of the Museums of France, and with the support of the Banque nationale de Paris (BNP).

Painted by the great Venetian artist in 1570-1573 for the monastery of the Servites in Venice, and given by the government of the Republic of Venice to Louis XIV in 1664 as reparation for a diplomatic incident, the painting had at last found a place worthy of it in 1730 in the Hercules Salon in Versailles. Left in the Palace by the Revolution, it was removed in the early reign of Louis-Philippe before returning in 1961 as part of the refurnishing of the Palace. In the early 1990s the painting looked in a poor state, in spite of previous restoration work, obscured by particularly thick and yellowed varnishes.

A large-scale and “fundamental” restoration was called for, accompanied by a complete study of the history of the painting and of its damage. This restored its full splendour and gave it back its full place in the decor of the State Apartments, highlighting the taste of Louis XIV and the influence of the great Venetian masters of the Renaissance on French art both of the 17th Century and of the Enlightenment which are combined in the Hercules Salon. 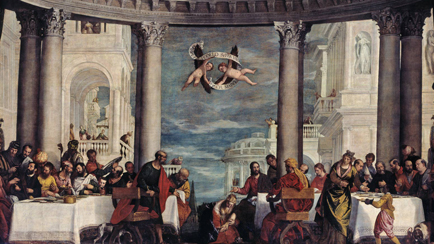 The Meal in the House of Simon, by Veronese