1710 : The Royal Chapel of Versailles

The present Chapel of Versailles was built by Jules Hardouin-Mansart between 1698 and 1710. Several chapels had succeeded each other and in 1679 it was decided to place it definitively in the North Wing near the King’s apartment. In 1682 a new provisional chapel was built between the Thetys Grotto and the Envelope. Then in 1684-1685 a new plan was designed, largely inspired by the chapel of the Invalides with a cupola and square plan to occupy the middle area of the North Wing, but it was dropped in 1687.

The lofty structure of the present Chapel recalls the Gothic style with its large window arcades and its columns supporting the arched vault of the nave. The Chapel is aligned with the Envelope by its second floor and the gallery where the king attended services.

The lantern tower of the Chapel was destroyed in 1765; it reinforced the soaring verticality of the monument.

Marble was not used for the interior decoration except for the rich flooring of polychrome stone which illustrates the decorative exuberance invested here. The iconographic programme of the vault painted between 1708 and 1710 celebrates The Trinity. Three artists worked on this composition: Charles de La Fosse in the half dome the Ascension of Christ, Antoine Coypel in the central part of the nave with God the Father in his glory, and Jean Jouvenet painted The Pentecost above the royal gallery. The painters applied the paint directly on the fresh plaster and copied the numerous preparatory sketches. The iconographic programme of the sculpted decoration was also given a preponderant place in the decor of the chapel, for the trophies and pillar bases carved by Jean de Lapierre, Claude Poirier and Antoine-François Vassé. The central altar with its gilt bronze Pieta by Corneille Van Cleve miraculously escaped the desecrations of the Revolution. 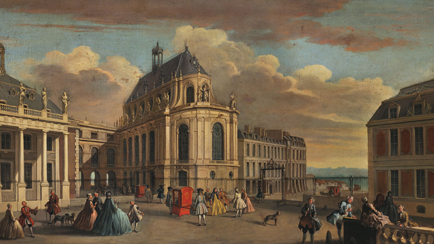 The Royal Chapel of Versailles