2011 : The restoration of the Stags Courtyard and the ground-floor bathroom of Marie-Antoinette

The Stags courtyard, remodelled several times, is overlooked by the interior apartments of Louis XV and Louis XVI on the first floor. It takes its name from the polychrome terracotta stag’s heads placed on its façades. These trophies have genuine stag antlers and most of them were replaced in 2003 thanks to the donation by M. Hubert de Givenchy.

The restoration of the balconies of the Stags courtyard, financed by the Société des Amis de Versailles, now allows visitors to admire from the restored balconies the small rooms too narrow to hold many people: the dining-room after the hunt (1753), the bathroom of the King (1768) and the wardrobe of Louis XVI (1789) whose wood panelling was restored in 2009 thanks to the generosity of Lady Michelham of Hellingly through the intermediary of the Société des Amis de Versailles. So these rooms are now accessible without any risk of deterioration.

The restoration of the bathroom of Marie-Antoinette was made possible thanks to the sponsorship of the Société des Amis Européens de Versailles. Begun in 1784 and completed in 1788, the room possesses superb carved wood panelling of the arabesque style, the work of the Rousseau brothers, while the overall design of the wood panelling is probably due to the architect Richard Mique. One can admire the foliated patterns, the trophies of bathroom instruments, swans drinking in a pond, reeds, pearls and sea shells, all decorative elements recalling the use of this room intended for resting after a bath. The floor is paved with black and white marble squares.

The original wood panelling had been put in storage. It was replaced in its identical state in 1984 with the application of the “programme” law of 1978-1982. Thanks to this restoration which consisted of gilding the rims of the mirrors, repainting the wood panelling and the door and window frames, visitors to Versailles can discover a room of great harmony, and a highly refined decor which shows the private life of the queen and her taste for the decorative arts. 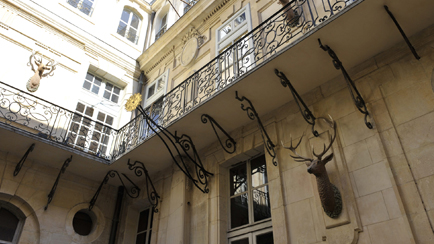