1855 : The visit to Versailles of Queen Victoria

In August 1855, Queen Victoria of Great Britain came on an official visit to Paris, during the Paris World Fair, accompanied by her husband Prince Albert of Saxe-Coburg, to meet the French emperor, Napoleon III, at a time when their two countries were fighting side by side in the Crimean War. Relations between the two countries had gradually normalised after centuries of opposition and conflicts. king Louis-Philippe had initiated a reconciliation in the 1840s but it did not last.

After arriving on Saturday 18 August 1855, the queen was received in Paris, but accommodated for greater comfort outside the city in the palace of Saint-Cloud. Napoleon III, whom Victoria greatly distrusted, managed to charm the queen, who was to leave an enthusiastic account of her visit to Paris, the first by a reigning British monarch since the 100 Years War… On the full programme of visits and receptions, the emperor had planned two visits to Versailles, the first in daytime to the Palace, gardens and Trianon on Tuesday 21 August, and the second on Saturday 25 August for the evening reception to mark the end of the royal visit. The elaborate festivity began with a ball in the Hall of Mirrors, followed by illuminations in the garden and a gala supper in the Royal Opera, where all the tables were presided over by the most important ladies of the imperial court. This state reception in the Palace of Louis XIV shows the intact prestige of Versailles as a place of ceremonial and power, whatever regime was in place. 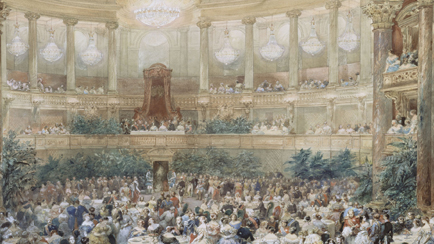