1821 : The construction of the Dufour pavilion

Since the halt of work on the “Grand Project” of Gabriel in 1775, the façades of Versailles facing the town showed unmatched buildings on either side of the royal gate. On the left, the old 2-storey brick and stone stable pavilion of the first Palace, built by Le Vau in 1662-1663 and embellished by Hardouin-Mansart in the late 1670s with a portico with colossal columns surmounted by a high sloping roof capped with a lantern turret. On the right, a sober neo-Classical stone pavilion three storeys high, whose ground floor formed a base surmounted by a portico of four colossal columns linking the two upper floors, and crowned by a pediment hiding the roof. Nothing could be less symmetrical! In the reign of Louis XVI, the King’s Buildings department approached several architects to take up the Project again, but the state of the kingdom’s finances completely ruled out the megalomaniac projects presented.

It was finally Napoleon I who, struck by this disgraceful effect, entrusted to Dufour, the Versailles architect, the reconstruction of the left wing to make it match the Gabriel Wing. Begun in 1814, the head pavilion was completed in 1821. But the work was then halted for good, and the pediment of the pavilion, now called the Dufour pavilion, remained blank. 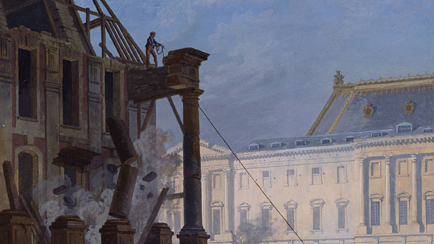 Work on the old wing