The complete restoration of the Hall of Mirrors between 2005 and 2007, with the generous support of the Vinci group, was one of the most extraordinary restoration operations in the history of Versailles. The project of a complete restoration, from the parquet to the vault, was not new in the Palace, but it took on considerable importance owing to the dimensions of the Hall and its worldwide fame. There could be no question of closing it off from the public, so the project was organised in two halves, with the work area being organised around a passage marked off by a wall-mirror reflecting the other half of the Hall.

The work called for many different technical specialists to deal with all the marble features, the bronzes, the mirrors, the paintings and the stucco decorations, the door and window frames, the furniture and the statuary, as well as all the electricity and security systems required.

At the end of this exemplary project, rich in discoveries about the history of the Hall and its construction (1678-1684), the paintings of the vault recovered all their meaning and light, enabling us to better understand the iconographic programme drawn up for Louis XIV at the end of the Dutch War at the high point of his reign. 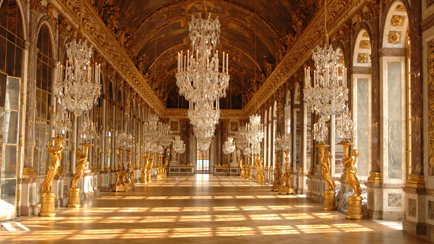