1811 : Napoleon’s stays to the Grand Trianon

When he became Emperor of the French in 1804, Napoleon I thought of moving into Versailles and asked his architects to produce projects for the renovation of the Palace, or even the completion of the Grand Project, left unfinished in 1775. But the huge cost involved made it impossible and the work was postponed until more favourable conditions prevailed.

But the emperor was interested in the Grand Trianon and wanted to use it as a country house in the summer. He visited it in March 1805 and gave the order to begin work on it. He suggested to his mother, Madame Mère, that she could use the Grand Trianon in the summer, while his sister Pauline, Princesse Borghèse, could live in the Petit Trianon. The first refused and never came, but the second accepted. The refurbishment work was handled by the architect of Versailles, Trepsat, while new furniture was ordered. Pauline stayed there the following summer and received her brother as a dinner guest there. Although still waging a military campaign, Napoleon did not abandon the idea of moving to Trianon. New work was ordered in 1808 from Trepsat, assisted by the young Dufour, and the Palace was entirely refurnished in 1809-1810. But it was when he announced his divorce from the Empress Joséphine on 15 December 1809 that the emperor made his first long stay. He travelled there that very evening to get over his sorrow, and from there paid a visit to Malmaison, where he also spent Christmas. Remarried with Marie-Louise in April 1810, he came on a visit with her in June and she spent part of the summer there in the Petit Trianon. The imperial couple stayed there again in July 1811, then in August for the Empress’s birthday. The emperor’s last stay was in March 1813, after the disastrous campaign in Russia and when he was preparing his new campaign in Germany. 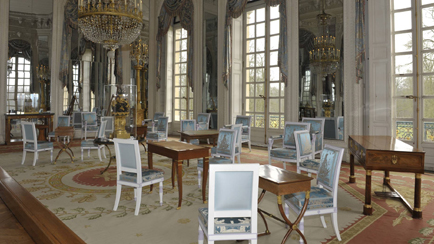 Salon of Madame Mère in the Grand Trianon