The first Versailles, the palace of Louis XIII

After coming to Versailles as a child to hunt with his father Henri IV, Louis XIII had a hunting lodge built here in 1623-1624. Then in 1631-1634, he had it demolished by the architect Philibert Le Roy and replaced by a new palace built with brick and stone. The royal residence could then accommodate with dignity the king and his entourage when they came on hunting trips.

Louis XIII in armour is flanked by allegories of France and Navarre, with the latter’s arms on the right of the painting. The king, wearing a crown of laurel, is depicted at the height of his power as commander with his white scarf, reigning gloriously over the kingdoms of France and Navarre reunited by his father, Henri IV. With the successive sieges of La Rochelle in 1628 and Corbie in 1636, the military victories of Louis XIII announced the even more glorious ones of his son Louis XIV. Louis XIII was also the monarch who dared to stand up to the powerful dynasty of the Habsburgs.

The painter Simon Vouet was one of the outstanding artists of the reign of Louis XIII. He was appointed first painter to the king after his return from Italy in 1627. His work features many allegorical and religious compositions, but his portraits are rather rare.

Louis XIII stayed in Versailles as a child in the residence of the Gondi family when he accompanied his father king Henri IV on hunts, for example during August 1607. He returned for hunting stays in 1617, 1619 and 1621 and from 1622 on he maintained a small game reserve. Wishing to have a more comfortable stay, in 1623 he decided to have a house built in an enclosure covering about 2.5 hectares. 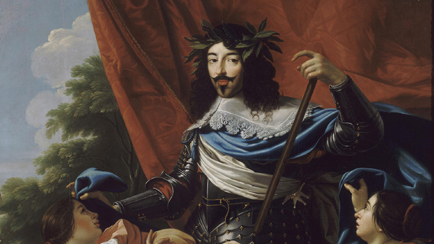 Instructions: To view the 3D scale model, you must download the Google Earth plug-in. The plug-in is an extension of the Web browser. It will enable you to consult and explore the geographic data incorporated in a 3D globe on various websites.

NB: the complet display of the scale models may take a few minutes.

During his hunting outings, king Henri IV came as far as Versailles to track down game, as he did for this beat on 15 January 1604. Setting out from Saint-Germain-en-Laye for Paris, Henri IV stayed in the seigneurial residence of the Gondi family at Versailles and dined there on 13 January 1609.

The full-length portrait by Pourbus shows the king wearing a black doublet and breeches standing in front of a green drapery. His left fist leans on his hip and his right hand rests on a table covered by a red cloth with gold embroidery.

Louis XIII is depicted holding his commander’s baton and wearing the blue ribbon of the Order of the Holy Spirit. Seated on a rearing horse, the king stands out from the landscape background, showing his hold over his kingdom. This very large canvas is attributed to Claude Deruet, an artist from Lorraine.

Louis XIII remembered the very good times he had out hunting with his father Henri IV near Versailles. When he came of age and after the Day of the Dupes in November 1630, Louis XIII ordered the architect Philibert Le Roy to build a small hunting lodge for him so that he could have a more comfortable stay in Versailles. The palace was built in 1636, after Louis XIII purchased the seigneury of Versailles in May 1632.

The royal family is depicted here in a collective portrait in which Anne of Austria, wearing a mantle decorated with fleur-de-lys and fringed with ermine, seated in a three-quarters pose facing the spectator, is flanked by her two sons. On her left, Louis XIV stands wearing children’s clothes and the blue sash and cross of the Order of the Holy Spirit. His brother, Philippe d’Orléans also wears the blue sash and a child’s dress. The royal crown has been placed near the young Louis on a piece of furniture.

The painting was given by Anne of Austria to her butler Pelletier. It remained with his descendants until it entered Versailles in 1836.

Louis XIV, his brother and queen Anne of Austria discovered Versailles on outings from Saint-Germain-en-Laye. The young heir to the throne visited Versailles in 1641 with his father Louis XIII when he was three years old. Later, after becoming king, would Louis XIV remember his stay in this small castle detested by the courtiers because they regarded it as a mediocre and damp building surrounded by a forest and marshes?