After the completion by Le Vau of the new façades of the Palace looking over the gardens – the “Envelope” – in the early 1670s, it was decided to lay out a new parterre in front of it. Executed according to the designs of the first painter to the king, Charles Le Brun, it consisted of series of ornamental ponds surrounded by strips of lawn and flower-beds holding sculptures, groups or single figures. The central pond was circular and linked to four others with a more complex shape, all five forming a Saint Andrew’s cross.

A central sculpture group was to depict Mount Parnassus surrounded by the four elements. Eight groups of abductions, symbolising the perpetual mutations of the elements, were to line the side ponds. Only three were carved: Pluto and Proserpine, Cybele and Saturn, Boreas and Orythia. Twenty-four statues in six groups evoked the four elements, the four seasons, the four times of the day, the four continents, the four poems and the four temperaments of man. The groups and statues were carved after the drawings of Le Brun and under the supervision of Girardon. The figures and their attributes were taken from the celebrated book by Cesare Ripa, Iconologia.

But when the first statues were set up, the overall effect failed to please. The statues were finally placed on the edges of the flowerbeds alongside the hedges, where the combined effect was less perceptible. The central group was never carved, and only three of the abduction groups were completed and placed on the parterre of the Orangerie and in the Colonnade grove.

This series of sculptures, the “Grand Commission” of 1674, which took twenty years to complete, was one of the finest collections of French sculpture of the period, and the one which probably best expressed all the qualities of the new French art of the century of Louis XIV. 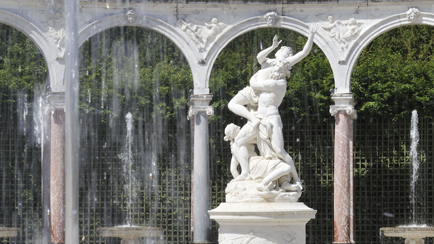 The Rape of Proserpine by Pluto, sculpture by Girardon