The “Cassette” Room – one of the former bathrooms of Louis XV – was one of the finest in the interior apartment of the King. It is a very small room behind the “New Rooms” fitted out for Louis XV in the 1750s to extend his apartment, to the detriment of the Ambassadors Staircase and the Small Gallery of Louis XIV. Imagined by the king in 1768, it was fitted out by Gabriel between summer 1770 and autumn 1771, and decorated with marvellous wood panelling by Jacques Verberckt on aquatic or bathing themes. It was transformed by Louis XVI who removed the bath-tubs to make it into an office and had the wood panelling gilt with three tones of gold: yellow, red and green. This is where the king kept his personal accounts, hence the name of the “Cassettes” room given to it today. The very deteriorated wood panelling was carefully removed, restored – mostly cleaned and not re-gilded – then remounted, while the room was refurnished.

This extremely refined restoration, inaugurated on 18 October 2004, was made possible by the support of L’Oréal. 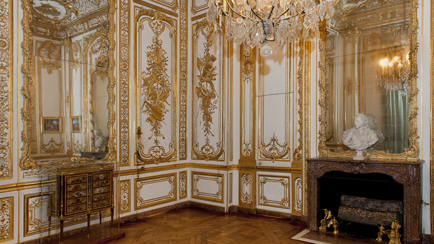